Posted on September 18, 2014 by darkagefiction 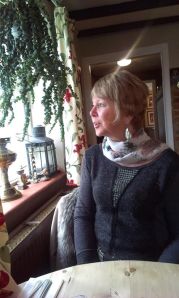 Today I have the privilege of interviewing Tee Geering, one of my fellow authors at Thorstruck Press. As she mentions in her recent blog post we decided to team up to help each other with our editing. I’m excited for the opportunity!
Tee is originally from Hastings, Sussex, England but has made Kent, often referred to as “The Garden of England,” her home. Aside from writing, Tee has made friends with a number of the local squirrels, foxes and birds that seem to wander through her garden.

She’s also spent the last twenty four years working as a volunteer for the Kent Police Force. Tee says her co-workers would say they love working with her because “she is barking mad and completely off the wall.”
Fortunately these sorts of things are usually just the side effects of being a writer.

She has also enjoyed opportunities giving lectures to ‘A’ level and Performing Arts students on creative writing. It became an extremely interesting sideline and was a natural break from editing, reviewing and writing.

Q: Tee, how far back does your interest in writing go?
A: I started to write initially in my teens for amusement, but began to write seriously about five years ago. I didn’t choose to write fantasy it chose me…

Q: I can relate to that! Fantasy seems to be like that, just sneaking in and making itself at home. So your writing has been primarily fantasy, then?
A: Well, I’ve written many short stories that at the moment are, for the moment, basically gathering dust. I will get around to doing something with them at some time. They are a mixture of crime, fantasy, and romance (though I wouldn’t consider myself a serious romance writer).

Q: How would you categorize your writing style?
A: I’ve been told it compares to J.K. Rowling and Jean M. Auel.

Q: Very good company to be in! I understand you are currently in novel writing mode. How did that come to pass?
A: Whilst sitting in my garden amongst the Shasta daisies one hot, balmy summer evening, I idly watched a spider spinning a web. I was intrigued by the intricate structure, and ease of his accomplishment. A story line formed in my mind and I began making notes. My mind was racing, and my fingers were loaded with words. A couple of glasses of red wine and Shasta was born.
I then realised there was a sequel lurking within. Another character introduced himself as Erasmus a time travelling lover with attitude. My quick fingers helped him to achieve his time travelling and within a year the trilogy was complete.

Q: That moved very quickly! And I understand the trilogy has been published?
A: Yes, whilst interviewing a publisher for the writing group I belonged to, I was both shocked and delighted to hear that they were head hunting me for publication of my books. The rest as they say…is history.

Q: But I understand that publisher closed and you’ve come to Thorstruck Press?
A: Yes, they closed and the books are not currently available. But I have signed with Thorstruck Press and they’ve decided to put all three books together under the collective name of SOULFATE. Thorstruck will be releasing SOULFATE next month, October 2014.

Q: Are there any other projects in the making? Up and coming books?
A: Most definitely! I have another story half written in the Erasmus trilogy which my fans are begging me to finish. Meanwhile some of them are apparently rereading Eye of Erasmus and Shasta Summer in anticipation!

Q: That has to make you feel good!
A: My other major work in progress is a fantasy crime (Working title is Mirror of Darkness/Mirror of Destruction) The title evolves as the story progresses.
I was also commissioned to write a true crime of the Sandy Hook Newtown CT tragedy from a fly on the wall perspective. Originally I said no, for obvious reasons. But the story had already started to write itself in my head. I relented and continued on, but it really took a toll on me. It made me physically ill and I sobbed buckets of tears but I persevered and finished it. Highlight Hollywood has that one at the moment to read.
Also, one of my author friends who writes major crime has asked me to collaborate on a hard boiled crime novel with him. He’s enjoyed quite a bit of success as a writer so I’m very excited about that project.

Q: It sounds like we have a lot to look forward to! Tee, thank you so much for spending time with us today and letting us get to know you. I’m sure I’m one of many awaiting the release of SOULFATE next month.

Look for SOULFATE on Amazon.com 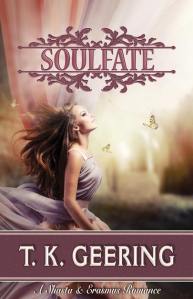 You can also catch up with Tee on her blog at: http://www.tgeering.blogspot.com