The Unwise Woman of Fuggis Mire

Too long have I waited to read “The Unwise Woman of Fuggis Mire”, by Raven Dane.  Available on Amazon.com. 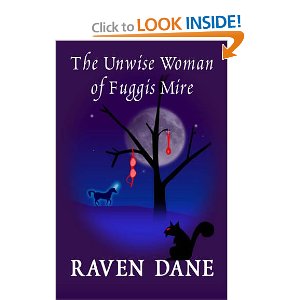 What a strange title. What could it possibly be about? Imagine the illegitimate offspring of “Lord of the Rings” and “Princess Bride” and you get a fair idea.

Dane has taken all of the elements associated with high fantasy and distilled them into a rollicking story containing all of the drama, angst, and adventure one would expect from the genre. Aside from seeing how all these elements can make a great story, she also shows us how they can make for an utterly hilarious tale. The reader will have a constant smile upon their face and may, at unexpected moments, burst into laughter.

In “The Unwise Woman, the forces of good and evil are pitted against each other in the inevitable though quite unorthodox confrontation. We have heroes, villains and assorted sundry characters that seem more real and down to earth than many we read about. They are brave, but spineless, lovely but ugly, practical but frivolous, pragmatic but whimsical; in short, a bundle of contradictions just like the rest of us, often striking a dramatic pose while yet wondering what in the hell is going on.

This heroic tale is populated by Morven, the Unwise Woman (a witch pledged to do no harm); Jed, the swashbuckling highwayman;  Demonica, an evil demi-goddess; an assistant baker with a cherished old, and perhaps dangerous bun; a ‘manky looking unicorn of undetermined colour’; a beautiful elf sporting Doc Martens; hordes of voles, a demon lead guitarist for a Heavy Metal band; the mysterious Nutsferatu; dozens of other variations on fantastic and mythic beasts; and of course – butterbeans.  Dane shamelessly broadcasts her plot contrivances and sequel setups and almost simultaneously will wax both poetic and base, showing us both the virtues and flaws of her very real characters. And yet quietly beneath all the mayhem we find a simple, yet compelling message.

In spite of her other, less hilarious works, we hope the author will deliver up at least one  promised sequel to “The Unwise Woman.” I can envision attending a reading with Ms.Dane. The attentive audience would experience an eloquent author, with tongue firmly planted in cheek, regaling her audience, holding them in rapt attention with both epic myth…and butterbeans.