Woad Trip: This ain’t no Smurf!

Posted on August 3, 2011 by darkagefiction

Even though there were a number of historical discrepancies, I found the 2004 movie “King Arthur” quite interesting. It was fascinating to see here what I had read in several other accounts; Pictish women fought alongside their men in battle. 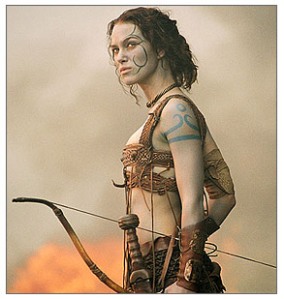 In the movie’s last battle, Guinevere (portrayed here as a Pict – called a “Woad” in the movie) battles Cynric, son of the Saxon king Cerdic. Part way into the battle she finds him too much to handle, and Lancelot takes over for her. Indeed, Cynric is a skilled fighter. At the end of their fight, Lancelot and Cynric have killed each other. But what I was hoping to see in that scene was Guinevere herself take out this formidable Saxon foe.

Having been deprived that wish, I fulfilled it in Draegnstoen  I wrote a scene where Feodia, a Pictish princess and wife of the hero, goes into battle and takes on Malleolus (The Hammer), a brutal Roman centurion who has ice water running through his veins.

In celebration of finishing the final draft of Draegnstoen today, an excerpt of that scene appears below. Enjoy.

Feodia looked up to see a Roman striding toward her; grim, determined hatred in his eyes. Turning to meet him she knew he was the leader. This was no common soldier; this was an unwavering warrior whose only goal was her death. But the potion she inhaled was in full effect, and she was now more a fearless animal than a soldier.

They paused a moment and then Malleolus’ sword came crashing down. She moved quickly and deflected the blow with her sword. Spinning, she swung her sword toward him, but he blocked the blow with his own steel. His broadsword was longer and heavier, but she moved more quickly and swung her Pictish blade. Another missed swipe with his blade, and he knew he just needed to connect once against this one, her bare skin would be no defense against his steel. But the patterns of blue on her body were frustrating to look at. They distorted her shape and size and he kept making adjustments in his style to compensate.

Her blade flew, somehow getting past the Roman sword, but it struck his armor and did little damage. They continued the dance of death, neither one able to prevail. Deciding to try something different, he waited for the right moment then spun, but in the opposite direction she expected. In close now, too close for his sword, he would sweep her feet, she would fall and then he would run her through. But something unexpected happened. His spin caught her by surprise, but in that last moment, face to face and just inches away from the blue naked woman, he hesitated for just a second. Right before he swept her legs, she clenched her fist and with all her might, and struck him at the base of his nose. He made her fall; she rolled and scraped her leg, but her punch reeled him, blurring his eyes with tears. Scrambling, she got to her feet in time to see him wipe the blood from his broken nose. Nodding at her, he grinned, drawing his sword up again to fight.

Their swords crashed again and again, and now she was tiring, gasping for breath. The man seemed to be made of iron, his muscles rippling with each motion. She knew her strength was no match for the Centurion’s but she swung again, and yet again, to no advantage. Her muscles burned, and it seemed as if she would have more luck hacking her sword against an anvil. But as she deflected another swing, she noticed something about how the centurion swung his blade. His style exposed a weakness of which he was evidently unaware. Again and again he parried, and she swung once more, this time upward. This time steel connected, opening up a cut in the Centurion’s upper inside left arm, just below the armpit. He paused for a moment, reached up and felt the gash with his right hand and pulled away blood soaked fingers. His eyes showed surprise, but nonetheless, wiped the blood off and drew up the sword to fight again. Only now, blood was dripping steadily from his left elbow, forming a pool on the ground.

Feodia slowly shook her head and stepped back. “Die….”

Looking at her with puzzled eyes, he stumbled, refocused and lifted his sword again; much more slowly. Again he staggered and struggled to raise his blade, but the weight was now too much. Gazing down to see his blood soaking into the earth, he looked up, astonished.

“Rome is fallen,” she declared.

Knowing the last words Malleolus heard would be hers, Feodia decided to repeat them in Pictish. It was the final blow. “Romei caitha.”

The centurion fell to one knee and then collapsed, falling sideways into the pool of his own blood.

2 Responses to Woad Trip: This ain’t no Smurf!