The Supreme Court, The Bible, and Gay Rights

Posted on September 25, 2014 by darkagefiction

On Monday, September 29th, the Supreme Court will reconvene and one issue that many people hope the court addresses is gay marriage. This matter creates strong feelings on both sides, with those supporting it often talking about equal rights for all. Many of those against it come from a Christian background. They cite the Bible and align themselves with the belief the scriptures say homosexuality is absolutely forbidden and thus gay marriage is wrong. As the Supreme Court may soon make a ruling on gay marriage, I decided to have my own look at the Bible and see exactly what I could find.

The chart below shows what the Old Testament has to say in regards to homosexuality. Homosexuality is specifically condemned in Leviticus. The penalty is death. First and Second Kings each have a verse where this practice is disrupted in order to stop it. The message is very plainly stated and there’s not much need for additional clarity. 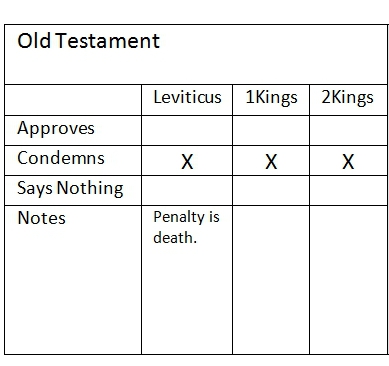 Let’s look at the New Testament. Jesus said he came to fulfill the Old Law. It was no longer in force and he illustrated the loving principles of the new law in his sermons and parables. But what did he say about homosexuality?  And in addition to his words, what did the apostles say about it? Turns out that neither Jesus nor any of those apostles who’d listened to him preach had anything to say about the subject.

Only a single voice from the New Testament, Paul, spoke against it.

Now, some may say Paul’s words were translated incorrectly and he was speaking only of homosexual rape. Perhaps. But let us not water down the issue. Others may say some of the epistles attributed to Paul may have been written by someone else. These questionable epistles include 1 Timothy. Some may point out he became an apostle while there were still twelve living (he becoming the 13th), that the events of his conversion are sketchy, that he never even heard Christ preach, that he says some rather offensive things in his epistles that don’t sound very ‘Christlike.’ Yes, yes, perhaps so. But all of those other issues aside, we are back to this.

Paul said in 2 Corinthians 13:1 – “In the mouth of two or three witnesses shall every word be established.” But here, on an issue that is so divisive, and where Jesus Christ was completely silent, Christianity’s two thousand year condemnation of homosexuality rests entirely upon the words of this one man, Paul. 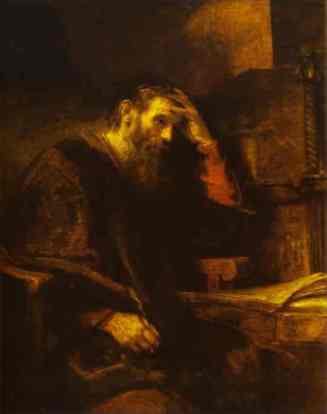 2 Responses to The Supreme Court, The Bible, and Gay Rights