Customer Service – in your dreams

Posted on September 8, 2011 by darkagefiction 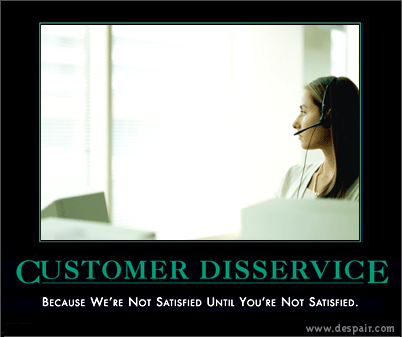 Is it just me, or is customer service getting worse these days? Doesn’t it seem reasonable that when the economy is bad that the clueless people would be the first ones to lose their jobs? Unfortunately that doesn’t seem to be the case.

Whenever you try to get ahold of someone to help you with a problem these days, you’re put on hold and forced to listen to: “Hi. Are you frustrated by the way we’re taking care of you? Why don’t you let us sell you MORE stuff? Press #3 to do that now!”

In the past week alone I’ve had two bad experiences. One company was set to come do some work in the kitchen and they changed the appointment FOUR times!
In an earlier instance I was frustrated by slow upload speeds with my internet service. I contacted customer service. Of course you can’t talk to a real person, but you can do “live chat.” The pat answer was to reboot the modem, router and computer. The technician promised to email me so I could get back to her. Her solution didn’t work. She didn’t get back to me.

Second attempt: This guy said to try the reboot differently. That didn’t work.

Third try: The woman said I can’t shut off my modem because it has a battery backup. I needed to push the unmarked “reset” button… a tiny pinhole, cleverly hidden in the back of the box. That didn’t work.

Fourth attempt: Sent email to company, outlining my previous attempts. I get a generic email back, a condescending tone; a friendly pat on the head. I gritted my teeth, sighed, and headed off to google.

Ah, here it is: My recently downloaded network drivers are causing the problem. Uninstall and let the default windows drivers handle the network instead. Problem solved. Maybe by my fourth attempt, they could have considered that possibility?

It’s been said: If you want something done right, do it yourself. Perhaps an addendum:  …and if you can’t do it yourself, at least have the good sense to forego calling customer service.

2 Responses to Customer Service – in your dreams